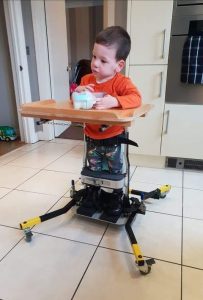 We love following the success of all of the children who come to us at The Movement Centre from the first time they meet us to their last review.

Carter lives with his family in Grimsby, has periventricular leukomalacia and hypotonia and at the age of one his movement was limited to only being able to lie on his back.

Three years on and after an 18-month course of treatment at The Movement Centre, the youngster is now self-mobile around the house, playing with his twin brother and attending school full-time – an amazing improvement which has exceeded all expectations of his parents.

Mum Claire takes up the story:

“Basically, Carter just lay on the floor, he couldn’t get about and we had to move him everywhere he wanted to go. He was very frustrated watching his brother up and walking while he couldn’t do the same thing – but he has always been a happy little boy.

“I saw The Movement Centre on a cerebral palsy page on Facebook. This lady’s daughter had benefited from two courses at the centre. I made contact with her and my thoughts were, that looks really good. I want that for Carter.

“I spoke to our GP who said there was nothing that could be done in our area so I contacted The Movement Centre, asked what was involved, how much it would cost, then booked in for an assessment and that was it.

“I was hooked and knew I needed it for Carter. 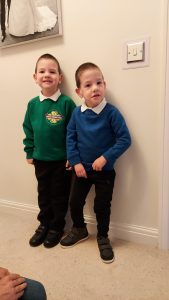 “He had a bog-standard standing frame at the time but he used to lean and slump in it and I didn’t think it was really helping him – it might have been helping his legs a little bit but not his core or his head control.

“I saw The Movement Centre standing frame and immediately realised that was exactly what Carter needed, it would work every part of him. Six weeks after getting the frame Carter could sit himself up.

“The frame was quite high initially because his head control wasn’t good. We started with reaching up activities for 30 minutes every day – so we did a lot of basketball, painting, throwing and catching, loads of things helping to get his arms up and his core working.

“The centre gave me a pack of activities we could do and give us ideas. The results were impressive and we saw improvement quickly.

“I remember going to the centre for our first review and was asked how things had been going. I was so excited! I said he can sit himself up, just look at him!

“It was lovely that Carter could get himself upright without me or his dad sitting behind him and helping.

“His little face the first time he did it was amazing and that was it from then on, he got quicker, he got better, started high-kneeling against the sofa and his toy box then he started to pull himself up and later began walking around the furniture. He was coming on so fast.

“The last time we went to the centre he was walking one-handed holding his dad’s hand and it was only two years on from him lying on the floor. I would never have thought that could ever happen. It was so lovely to see.

“Carter can now get up in the toy room to play with his brother, plays football in the garden, climbs the stairs to get to bed, all the little things we take for granted. He can get on the sofa to watch a film whereas before we would have to pick him up and put him on the sofa, but he can get up and down absolutely fine by himself now.

“He goes to school full-time and once lockdown finishes will start horse riding. There’s still a lot of therapy that we do but Carter wouldn’t be where he is now if it wasn’t for The Movement Centre

“The centre helped strengthen Carter’s head, core and legs. The staff there have been brilliant throughout the process and we couldn’t fault them in any way. They asked initially what we wanted from the course of treatment. I said I just want him to sit himself up.

“Now he can do so much more, he’s fully mobile around the house on his own. It’s more than we dared hope for, just incredible!”

Don't get in a flap - we still have a limited number of tickets left for our Peaky Blinders night on Friday - yes this Friday!? Thanks to MANIC Events it is going to be en epic night at Lion Quays Hotel & Spa - book your individual tickets or a full table here manicevents.co.uk/our-events-1/ols/products/peaky-blinders-evening fb.watch/8huJUKqegK/ ... See MoreSee Less
View on Facebook
· Share

A charity providing a specialist therapy, Targeted Training. Helping children from across the UK with movement disabilities to gain movement control.

Halloween Race Night - are you joining us?⠀ ⠀

#ThankYouThursday to our Summer Stars ⭐ Our nex

Did you see the stunning sunset last night? Farewe

We see many children with Down Syndrome every year

We are looking for more raffle prizes for our amaz