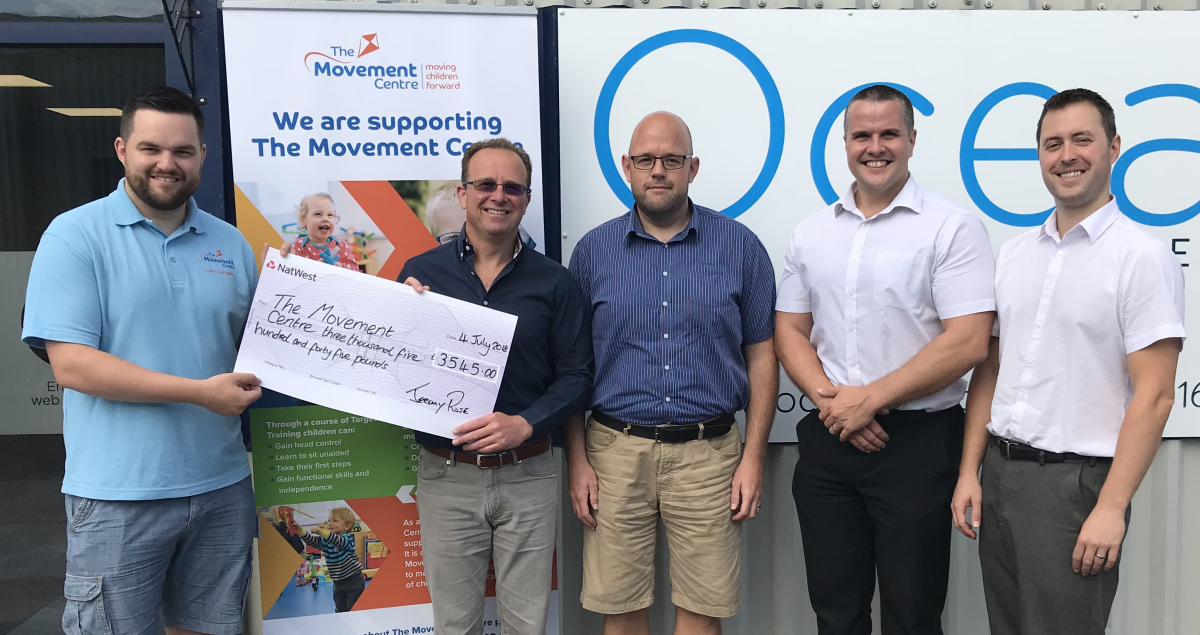 From left Curtis Langley from The Movement Centre is presented a cheque by Jeremy Rose, managing director at Ocean Telecom with colleagues Simon Calloway, Sean Bolas and Robin Talbot

Three members of the team at Ocean Telecom have raised a fantastic £3540 by scaling the UK’s three highest mountains in under 24 hours.We were delighted that Jeremy Rose, Sean Bolas and Robin Talbot  took on the Three Peaks challenge for The Movement Centre.

They were joined by colleagues Darren Lavender and Simon Calloway who volunteered to drive the long miles between each mountain. The team spent the months leading up to the challenge fundraising around the industrial estate to reach the total and money continues to come in from supporters.

A brilliant effort from the Ocean Telecom team!

Speaking after completing the challenge, Jeremy Rose said: “We started at 8am on Friday morning at Ben Nevis, we managed to get up and down in four hours 40 minutes. There was even some snow at the top to cool us down. After, we headed straight to Scafell Pike in the Lake District, but hit bad traffic and lost 30 minutes of our time. “We started climbing Scafell Pike, the weather was fine and the traditional mist and rain of the Lake District didn’t show up. We had to really push ourselves to climb this due to the loss of time and instead of our scheduled time of four hours to get up and down we managed to do it in three hours 20 minutes by climbing as fast as we could.

“We then drove through the night to Snowdon, however with the M6 closed, we were diverted losing 40 minutes of time. Arriving at Snowdon the adrenaline kicked in and we managed to get up and down in three hours 50 minutes, completing the challenge in a very respectable 22 hours 50 minutes. “My favourite mountain was definitely Scafell Pike, it was the toughest but the most satisfying to conquer in such a short time. As well as being a fantastic team building exercise, we’re all really pleased to have raised so much money for The Movement Centre. We are absolutely thrilled not only to have completed the challenge as a team, but that our loyal customers supported us so generously. The Movement Centre is a very worthy cause and we are delighted we could help fundraise for them.”

A huge thank you from everyone at The Movement Centre

Completing the Three Peaks Challenge is a fantastic achievement, one that the team from Ocean Telecom took on with amazing enthusiasm. The Movement Centre are delighted to be Ocean Telecom’s Charity Partner and we are extremely grateful for their fantastic support. As a charity, we rely on the kind support of donors and fundraisers, which is why the funds raised through the challenge will make such a difference to our work with children with movement disabilities. 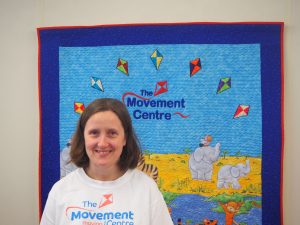 After a busy few months, and a growth in the number of children accessing Targeted Training therapy we have undergone a restructure to enable us to best meet the needs of The Movement Centre going forwards.

From this month Victoria Handbury-Madin will be taking on the new role of CEO of The Movement Centre. Pauline Holbrook will be Head of Clinical Services and will continue to work directly with many of our families alongside Physiotherapist Sarah Bew. Polly Roberts will be taking on the role of Operations Manager.

We are also delighted to welcome a new member to the team, Ann Norwood, who has joined The Movement Centre as our new Children’s Therapy Assistant. This has allowed Curtis Langley, who previously spent a large proportion of his time assisting our Physiotherapists to work solely on fundraising and marketing, as Fundraising and Marketing Officer. Lynne Ford will continue to assist our physiotherapists in sessions as well as coordinating our therapy services in her new role of Children’s Therapy Coordinator.

We are all excited about the changes and feel TMC is well equipped to move forwards and continue to grow and develop, enabling us to help more children access Targeted Training therapy.

Find out more about the TMC team here!

Please join us and take part in our Easter Egg decorating competition. Click on the donate button to pay for your entry and pop the picture of your entry on your news feed. Include your name and age. We look forward to seeing all your decorated eggs ❤️ 🥚 🐰 🐣
Thank you so much to Lanyon Bowdler for your support. ... See MoreSee Less

Children stuck at home during the coronavirus lockdown are being given the chance to decorate an egg for Easter to help a Shropshire-based charity.
View on Facebook
·Share