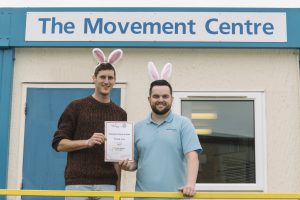 All sponsorship is now in from the 2018 Oswestry Bunny Run and it has been presented to a local charity. The 5k run, which first launched in 2016, raises money each year for local causes. This year the event supported The Movement Centre.

The 2018 event, which took place last month, raised over £860 to help support our work and has raised over £3000 for local causes since it started 2 years ago.

Thanks to the kind support of local businesses, all money raised by the participants of the Oswestry Bunny Run goes straight to The Movement Centre. Participants received a goodie bag, which sponsored by Sainsbury’s in Oswestry and volunteers from Oswestry Cambrian Rotary Club helped support the event. This year’s new online booking system was provided by Up Hill Down Dale.

“The Bunny Run is proud to donate all profits to The Movement Centre for their work supporting children with movement disabilities,” said James Manford, Co-organiser of Oswestry Bunny Run.  “Everyone enjoyed the day and it is great that we were able to raise money for a local cause as well as connecting the community through sport.”

The Oswestry Bunny Run is a fantastic event, and we were delighted to have been selected as the charity supported this year. We want to say a huge thank you to Oswestry Bunny Run, the supporters and everyone who took part in the event!