Case study: Abbie – from the recommendation of The Movement Centre by a friend to dramatically improved sitting balance and sitting on a horse unaided.

It’s always a pleasure watching the improvements made by our children on the journey through their treatment programme at The Movement Centre – they are an inspiration to us all! 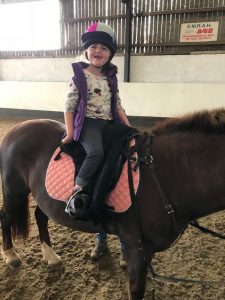 Abbie has global development delay, low muscle tone and poor balance. She began treatment at The Movement Centre in September 2019 – a course scheduled to last 12 months but due to the pandemic this has been extended until February 2021.

“It was certainly the right decision and we noticed a dramatic improvement in Abbie’s sitting balance within the first couple of months of starting the programme.

“Abbie has had horse riding lessons for five years and has always needed both parents with her holding onto her legs whilst she is sat on the horse, to prevent her sliding or falling off.

“After starting the program Abbie was soon able to sit on the horse independently, with just supervision needed. It was such a dramatic improvement; I’ll confess there were tears from both family and riding staff!! 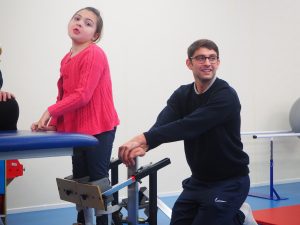 Photo taken before any restrictions

shame because the combination of riding and The Movement Centre programme was working brilliantly.

“The targeted training has involved Abbie carrying out activities whilst being supported in a standing frame, with the support in the frame graded according to need.

“Initially the frame supported Abbie around the waist and hips as well as at the knees. As her core strength increased the supports were removed  in stages and she now only has support at the knees.

“Abbie spends between 30 and 45 minutes a day in the frame. It helps her work on her core strength whilst strengthening her legs too.

“Abbie’s strength in her legs and her core has definitely improved since starting the programme and she is able to stand for much longer periods of time. She has also started to move and use her right arm which previously would just hang down by her side.

“Staff at The Movement Centre are just so warm and friendly – it’s always enjoyable seeing them. During lockdown they were very supportive on the phone and via video call too if we had any concerns or questions.

“The video call was good but it was really helpful to see them in person so they could review and adjust the frame as needed.

“Jack and Lynne both have a lovely rapport with Abbie and she was really excited to see them again when the centre reopened – I understand Abbie was the first child back at The Movement Centre after lockdown.

“We are so pleased to have been able to access the Targeted Training programme. Our only wish is we had known about it sooner!”