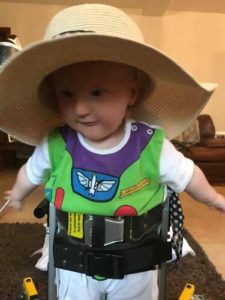 Training therapy could be beneficial.  After a 2-3 hour assessment, looking at all of Albie’s abilities it was determined he could benefit from a course of Targeted Training therapy and so his journey began.

Albie was 12 months old and it was clear his movement development had been delayed. In first initial assessment, Albie had worked really hard showing us his rolling abilities, and was working toward sitting with his hands on the floor, to prop himself up. When Albie was placed in a standing position with support under his arms from Sarah, his physiotherapist at The Movement Centre, he struggled with minimal load bearing through his lower limbs.

Albie was supplied with his specialist standing frame, with the top support holding him quite high up, as 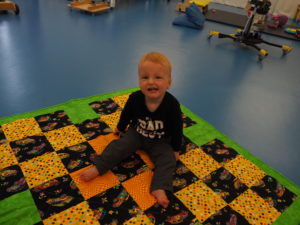 you can see from the first picture on the right. The addition of the tray was to help him with his posture, but it was advised that he have some Targeted Training sessions without the tray, to encourage him to reach.

He was given goals to aim for, which all related to his sitting abilities, both on the floor and on a bench. At his first review he achieved 3 of his 4 goals, with all of his sitting abilities improving. Albie was given updated goals of 4 point kneeling, but was struggling with load bearing through his arms. By his 3rd review, Albie had progressed so much, going from a little boy who could only roll, to gaining enough strength to crawl. This was another of his goals achieved!

Albie’s smile was so infectious, and he was growing up so quickly. Albie’s updated goals had shown that

his trunk and upper limbs were strengthening, so Sarah decided it was time to work on his lower limbs. Looking back to the start of his course, minimal load bearing through his lower limbs was a struggle, even with maximum support.

Nearing the end of his course, his development progressed really well, and Albie was ticking off the goals we were setting him. Albie had started putting weight through his legs, and at his 4th review he was able to show us his newfound skill of pulling himself up into standing.

So, from not knowing where Albie could progress to, Targeted Training had helped him get on his feet, but it didn’t end there! In January 2019, at his 6 month review, Albie took his first steps at The Movement Centre!! What an achievement, well done Albie!