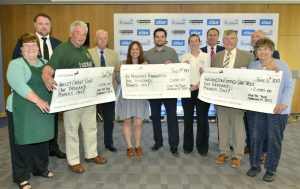 The top three organisations in the Cash For Your Community Campaign: The Movement Centre, Wellington Cottage Care and Willey Cricket Club.

Vicky, Curtis and Sarah from The Movement Centre attended a awards event on the 6th June for the Shropshire Star’s Cash For Your Community 2017 Campaign. We were delighted to find out that, thanks to our supporters, we came first and received a donation for £5000!

Cash For Four Community, now in its third year, was started when sponsors Enterprise Flex-E-Rent partnered with the Shropshire Star to share out £20,000 among local charities and community groups. We were chosen to be in the top 50 out of 132 organisations that entered. Readers of the Shropshire Star could then vote for their chosen charity or community group by collecting tokens that are printed in the newspaper each week and sending them in with a nomination form.

A huge thank you to everyone who supported us with the campaign and to Enterprise Flex-E-Rent and the Shropshire Star!