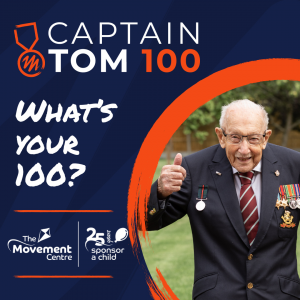 London Marathon Events, and we are featured below.

David Beckham, Dame Judi Dench and Mary Berry are just some of the celebrities urging the nation to take on the Captain Tom 100 challenge over what would have been the weekend of Captain Sir Tom Moore’s 101st birthday – Friday 30 April to Bank Holiday Monday 3 May.

The Captain Tom 100 invites everyone to dream up a challenge based around the number 100 and complete it anytime and anywhere over Captain Tom’s birthday weekend to raise funds or donate to The Captain Tom Foundation or the charity of their choice.

Celebrities lending their support to the campaign include:

Captain Tom’s daughter, Hannah Ingram-Moore, said: “The support from around the world for the Captain Tom 100 has been incredible and we are so excited to see it get underway on what would have been my father’s 101st birthday. It’s the perfect way to celebrate his remarkable achievements and also ensure his message of hope lives on. We plan to spend some time that weekend retracing his 100 laps of our garden and reflecting on treasured family memories. He would have really enjoyed watching people across the country uniting to have fun and inspire hope with their Captain Tom 100 challenges. It’s going to be a very special bank holiday weekend.”

The public and charities have already started raising money for their challenges and have been sharing them via #CaptainTom100. These include:

Many companies and organisations are also signed up to the Captain Tom 100 including Great Western Railway (GWR), Formula One motor racing team Williams Racing and Captain Tom’s birthplace in Keighley – all hoping to inspire others to get creative with their own challenges.

GWR will send the ‘Captain Tom Centennial’, an Intercity Express train, on an epic journey across its network as it stops at 100 stations in just over 40 hours, covering nearly 1,500 miles. Williams Racing is aiming to complete 100 pitstops over the course of the Portuguese Grand Prix weekend raising money for the team’s Official Charity – Spinal Injuries Association. And the town of Keighley in West Yorkshire, where Captain Tom was born, is encouraging its residents to join in to honour Captain Tom’s memory. Town Mayor Cllr Peter Corkindale will be walking 100 times around the Town Hall Square on Friday 30 April, while Robbie Moore MP has pledged to run 10 x 10k runs over the next 10 weeks.

The family will be launching proceedings for the Captain Tom 100 weekend from a very iconic London sporting venue on the morning of Friday 30 April.

Once supporters have chosen their Captain Tom 100 challenge, they are invited to fundraise or donate to The Captain Tom Foundation or another charity of their choice and share their 100 on social media, using #CaptainTom100.

The Captain Tom 100 is organised by The Captain Tom Foundation with London Marathon Events and supported by the Mass Participation Sports Organisers (MSO), adam&eveDDB, LiveWire Sport and Studio Republic (all working pro bono).

or you can visit The Movement Centre landing pages here Captain Tom 100 (justgiving.com)