Freya was referred to The Movement Centre and attended for her initial in March 2018.  Freya then went 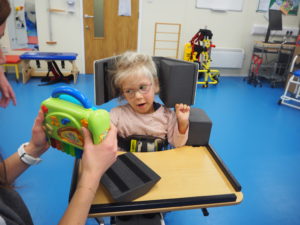 on to start at course of Targeted Training Therapy at the end of August 2018.  Freya had a diagnosis of Crigler-Najjar syndrome Type 1, Kernicterus, Dystonia and Global Development Delay and this caused issues with head control.

Freya’s mum said “Before Freya started her course of Target Training Therapy she had very limited head control and could not keep her head in a midline position.

Freya’s head was turned to the left side and she need assistance turning her head to midline position and to the right. Freya is non verbal but very sociable and uses eye gaze to communicate. This was difficult to use as she could not turn her head to indicate what she wanted.

Just before her course of therapy commenced, Freya used an eye gaze computer and she couldn’t use it independently because of not being able to hold a midline position.  We had to hold Freya’s head in a midline position and she only tolerated this for 5-10 minutes at a time.

Seven months in to her course of Targeted Training Therapy, Freya got to use to an eye gaze computer again.  This time Freya could hold her head in a midline position independently and was able to use the eye gaze technology for 30-40 minutes with no rest in between.

from left to right. Because of this her communication has come along and she is more vocal.

At nursery Freya can now follow what the other children are doing by turning her head and can also join in with their play more. With better head control, she is now using a communication board at nursery to choose the activities she wants to do”.

A course of Targeted Training Therapy has certainly had a big impact on Freya’s life. Freya’s quality of life has been improved as she is now able to communicate her needs and wishes and to interact with others by using eye gaze technology.  Freya is now able to turn her head and keep a midline position for longer allowing her to watch and learn from the world around her as well as taking part in many activities that she enjoys.

Freya is a very happy little girl who loves interaction and we hope that she continues to make progress in the future.