Leo was 18 months old when referred to The Movement Centre. He had been delayed in his motor development and had not yet succeeded in pulling himself to standing (by this time a typically developing child is generally walking).

A thorough assessment of Leo’s abilities was undertaken at The Movement Centre. The assessment

showed that he had difficulty with his trunk control and it was determined that he could benefit from a course of Targeted Training therapy. The course would be aimed at improving his strength and endurance to tolerate standing and progress his strength and control towards doing so independently.

At the appointment he was measured for his Targeted Training standing frame. Once it was ready, and funding was in place, his course started. Leo was given goals to work towards, and he and his family was sent home with a specific, individual physiotherapy programme. Initially he worked on his kneeling and sitting abilities. He was a determined little boy, so we were sure he could achieve these goals.

Leo and his family attended his first review around 8 weeks later, and we were all impressed with the 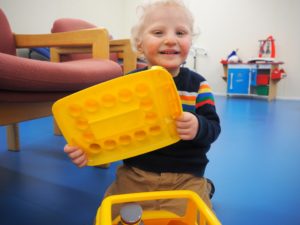 progress he had already made. They had all worked really hard, engaging Leo in reaching activities, playing with his favourite toys. Having achieved all of his original goals, Leo’s Physiotherapist, Pauline, made the decision to lower the amount of support from the standing frame, and give him new goals to work towards.

Other goals such as crawling abilities were surpassed, and Leo continued to work on his standing abilities. Leo enjoyed being in his standing frame, and was really engaged. He also enjoying the feeling of standing, so we were sure it wouldn’t take to long for him to find his feet.

At his third review, about half way through his course of therapy, Leo had achieved his goal of standing while supporting himself on a bench. He could even take few steps sideways. He really relished this moment and smiled throughout.  Leo was given updated goals, which presented him with an even bigger challenge. He was now asked to take some steps, while holding onto his mum’s hand. He surpassed expectations again! On his last appointment, smiling as ever, Leo showed us all his fantastic stepping, even showing off walking up our steps.

“As seen today, Leo has certainly found his feet.  He is hugely motivated to be in standing and stepping when changing location.  If someone is close by, he will grab an opportunity to have support with his stepping but he has clearly demonstrated that he can do this very successfully independently”. Physiotherapist, Pauline  (at Leo’s final assessment).

Leo’s new abilities mean he can be far more independent, which is already having a huge impact on his life.

We are sure Leo will continue to progress, and have a very bright future!

Don't get in a flap - we still have a limited number of tickets left for our Peaky Blinders night on Friday - yes this Friday!? Thanks to MANIC Events it is going to be en epic night at Lion Quays Hotel & Spa - book your individual tickets or a full table here manicevents.co.uk/our-events-1/ols/products/peaky-blinders-evening fb.watch/8huJUKqegK/ ... See MoreSee Less
View on Facebook
· Share

A charity providing a specialist therapy, Targeted Training. Helping children from across the UK with movement disabilities to gain movement control.

Halloween Race Night - are you joining us?⠀ ⠀

#ThankYouThursday to our Summer Stars ⭐ Our nex

Did you see the stunning sunset last night? Farewe

We see many children with Down Syndrome every year

We are looking for more raffle prizes for our amaz