At Christmas, The Movement Centre were asked to support a local rotary group on the Santa sleigh tour.  We had a team of 9 who joined some rotary members to walk around the streets of Oswestry, where families could come out and see Santa on his sleigh. 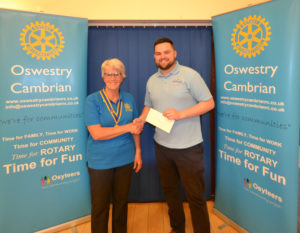 We had great fun, and seeing the children’s faces as Santa flew by on his sleigh, it was a picture.  Oswestry Cambrian Rotary provide Santa and Sleigh for the annual Christmas Parade in Oswestry on the first Saturday in December. Then they collect money around the streets of Oswestry and surrounding villages up to Christmas eve. Money collected is distributed to local charities and organisations and other charities supported by Rotary.

Curtis, Fundraising and Marketing Officer from The Movement Centre went along to the cheque presentation at Oswestry Cricket Club. It was a great evening where over 10 charities collected a share of the donations. We can’t thank the rotary club enough.