Oswestry Rugby Club and The Movement Centre, are joining forces to attempt a Guinness World Record for the 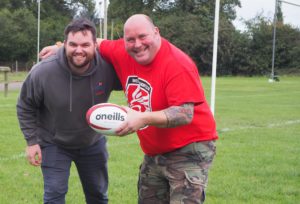 Largest Rugby Union Lesson. If successful, Oswestry Rugby Club would be the new holder of the record, which is currently held by Tokai University Rugby Football Club in Japan.

The Guinness World Record attempt will take place on Sunday 20th October at Oswestry Rugby Club’s Rugby Minis Festival, being held on Oswestry Showground. Oswestry Rugby Club is hoping to have over 1200 people take part on the day, to ensure they are in with a good chance of beating the current record of 602 people. We are calling on the public to join in and get involved!

There will be a special appearance on the day from Shropshire born England rugby player, Kai Owen and the session will be taken by Ex-Wales player Alex Murphy. Warren, Chair at Oswestry Rugby Club said “This is a fantastic opportunity to be involved in and we are urging local businesses and the public to get behind us and help us break the current record. It will be a great day, at our family friendly club. This exciting event will also promote health and fitness in young people and families, with all participants getting active for the lesson.”

To take part participants need to arrive at Oswestry Showground by 12noon on Sunday 20th October. The aim is to get as many people as possible to take part but there will be an upper limit on the amount of people can be part of the record attempt.

The event will also raise funds for The Movement Centre and volunteers will be collecting donations from participants and spectators on the day.

We are delighted to be a part of this fantastic event and are really excited that there may be a new world record holder in Oswestry. This is a really special event for the town so it would be great to see as many people as possible joining us on the day!