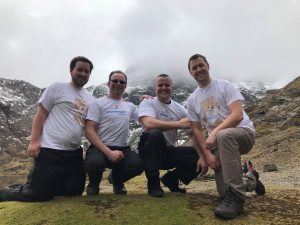 Training on Snowdon, from left Chris Spriggs, Sean Bolas, Jeremy Rose and Robin Talbot of Ocean Telecom who will all be taking on The Three Peaks Challenge for The Movement Centre.

Jeremy Rose, who runs Ocean Telecom on Mile Oak Industrial Estate in Oswestry will be taking on the ‘Three Peaks Challenge’ in May this year to raise money for The Movement Centre.

Three members of the Ocean Telecom team, Robin Talbot, Chris Spriggs and Sean Bolas will be joining Jeremy on the challenge which will see them scale the three highest mountains in the UK. Starting in Fort William, the team will climb Ben Nevis, Britain’s highest peak in around five hours, before driving almost six hours to Scafell Pike in the Lake District. The last leg of the journey will be to Snowdon in North Wales, where the team have been carrying out regular training.

Although Jeremy has completed the Three Peaks once before, the team accompanying him vary in experience when it comes to mountaineering but are determined to complete the gruelling physical and mental challenge in 24 hours.

The team started their training in February and have already climbed Snowdon twice in very icy conditions.

Anyone wishing to donate, should visit Jeremy’s Just Giving page. 100% of the donations will go to The Movement Centre as the cost of the challenge is funded by Ocean Telecom.