When Ryder Morton was 6-weeks-old, he started going to a baby and parent group near his home, with 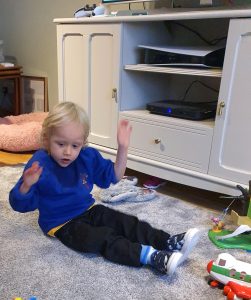 his mum Sarah. After a regular attendance at the group for a couple of months, Sarah noticed that something about Ryder seemed different to the other children.

“We saw other children the same age and they were all starting to hold their heads up and show signs that they would soon be sitting up, but Ryder wasn’t doing any of that.

“At his five-month check up we mentioned to the nurse that he hadn’t lifted his head up, but she assured us that it was still too early to be comparing his development to other children’s. When he still wasn’t holding his head up at his six-month check up we were told that it was definitely something that he should have been doing by then,” she said. 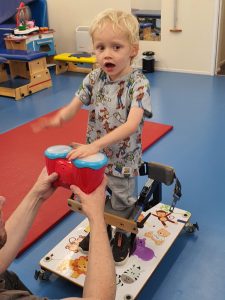 Sarah first became aware of The Movement Centre after attending the 2019 Kidz to Adultz Exhibition in Manchester.

She said: “The stand just caught our eye. We had a chat with the team and when we came home we researched it a lot. At first, I was under the impression that The Movement Centre mainly helped children with tight muscles, such as those with cerebral palsy, but Ryder was the opposite with a Hypertonia diagnosis; his body just doesn’t hold him up.”

After reading case studies and testimonials from other families, Ryder’s parents decided Targeted Training would be perfect for Ryder, saying “We decided if it didn’t work, we’d have at least tried; we would have no regrets.”

Ryder’s first visit to The Movement Centre was in January 2020, where he was first fitted for his standing frame. Whilst he was due to return in April to begin his Targeted Training, the limitations of the Covid-19 pandemic meant that his first session was delayed. Finally, after Covid restrictions had been lifted, Ryder returned to the centre exactly a year after his initial visit.

As Ryder had undeniably grown in the year between his appointments, his original standing frame was no longer suitable for him. Luckily, the centre had one in storage which they tried ‘just in case’ and, by sheer luck, it fitted Ryder perfectly! The frame was set up with support at pelvic level and he was able to take a standing frame home with him on that very day.

“He hated his standing frame at first. I think it was the fact that it was making his body work and he was using muscles he’d never used before. However, within a week, Ryder soon became used to being in the frame.”

Sarah’s initial expectations for Ryder’s development through Targeted Training were relatively low. She 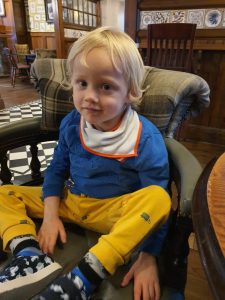 admits: “When we first started, the ideal goals would have been for him to be able to run around and play, but realistically we just wanted him to have some form of independence. Standing wasn’t even on the radar.

“Before, whenever he used to see something and wanted it, he wouldn’t be able to get there and, as he is non-verbal, we had to guess what he wanted. Now he can crawl over to things if he wants them. He’ll now crawl over to his standing frame whenever he wants to use it!”

Now that Ryder has become accustomed to his standing frame, he uses it everywhere, and for everything.

“During summer when the weather was nice, we’d hang dangly toys off our rotating washing line and Ryder would be stood nearby in his standing frame so that he could play with them. Now that it’s colder, the frame is mainly in the living room in front of the TV where he enjoys dancing, playing with bubbles and his favourite monster hand puppet. His level of independence is absolutely brilliant.”

At his first review, eight weeks after his initial session, Ryder had made excellent progress with his trunk control and functional abilities. He’d already achieved his first goal of sitting unaided on the floor with hands free of support for long periods of time and was also now able to sit on a therapy bench with hands free of support for at least 10 seconds, another of his goals.

Ryder’s standing frame is now set up with a flat support at sacral level and support directly below his knees due to his improved level of control.

Ryder’s childhood experience has also developed since he first began his Targeted Training at The Movement Centre.

His mum said: “Before, we used to have to take a supportive seat with us whenever we went to play with 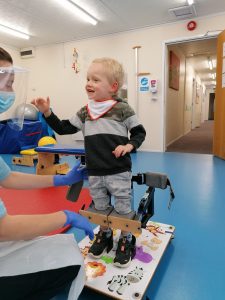 his friends or cousins, and he’d be off the floor and away from everyone else. Now that he can sit on the floor and hold himself up, he finally has the opportunity to join in and play with others. He’s also taken his first proper steps as a result of his treatment and I cried so much.”

When asked what she would say to any families considering Targeted Training for their child, Sarah said: “Just go for it. We’ve not come across any obstacles that we couldn’t get through.

“Without The Movement Centre, Ryder would not be at the stage he is at now. We’ve been to some places in the past where he was clearly just a number… everyone at the centre is so nice and they all really care about Ryder’s development and where he can get to.”

If you’re interested in learning more about Targeted Training for your child, please give us a call on 01691 404248 or send us an email to info@the-movement-centre.co.uk.