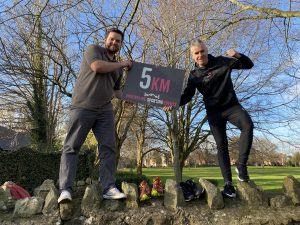 The Brynkinalt Running Festival is planned to go ahead on Sunday, July 4, and is open to people of aged 16 and over of all abilities with races covering three different distances on the day – 5k, 10k and 20k.

The Movement Centre, based at Oswestry, has 10 free places on its team to fill and is asking anyone interested in taking one of the available spots to contact them as soon as possible.

Anyone else signing up to run in the event is being urged to consider raising money for The Movement Centre through sponsorship or by setting up a justgiving page.

Organised by Adrenaline Sporting Events, the Brynkinalt Running Festival takes place in the stunning grounds of the Brynkinalt Estate at Chirk, with entry to the 5k event costing £14, £19 for the 10k event and £24 for the 20k. Anyone wanting to take part can sign up now and it’s hoped that each event will have around 250 runners.

Curtis Langley, of The Movement Centre, said: “We have been given 10 free places for the event and are asking people to be part of our team but, with places limited, it’s important they get in touch as soon as possible.

“Obviously, if anyone else running on the day would like to raise funds for The Movement Centre, we would love to hear from them. We would pay the entry fee provided they raise a minimum of £100 in sponsorship.

“We are delighted that Alan Lewis and the team at Adrenaline Sporting Events are organising the event. Alan is a big supporter of The Movement Centre and will be making a donation to us from money raised through entry fees – so the more people that sign up for the run the better.”

Mr Lewis said: “We are pressing ahead with the run and urging people to sign up now to take part. We are hoping the vaccine will have made a huge difference in the battle against Covid by then and the running festival will be a great opportunity for people to get out and run in the great outdoors among some magnificent scenery.

“It is open to all ages and abilities and it really doesn’t matter if people want to take part for fitness, the competition, their health, to raise money for charity or just for fun – they will all be welcome.”

To snap up one of the free places for The Movement Centre email curtis@themovementcentre.co.uk