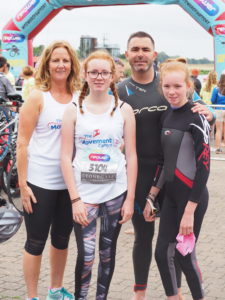 A Shropshire family have raised over £2000 by taking part in a unique challenge to raise funds for a Shropshire charity as part of the Superhero Series. The Superhero Series is the UK’s one and only disability sports series for the Everyday Superhero. The idea is simple: To create fun, full-throttle challenges where people with disabilities call the shots and don’t have to worry about cut-off times or equipment restrictions.

Firstly, Darren and Lydia took on the swim in the cold Dorney Lake. Lydia has cerebral palsy and even though she is well practised in the cold water of a leisure pool, swimming in open water was a massive challenge for her, but one she was determined to complete.

Once Darren and Lydia had completed the swim, they then got onto a bike to complete another leg of the triathlon. They were given a bike to use on the day by Quest 88, which worked in the same way as a tandem bike. Dad and daughter cycled and laughed their way around the course with ease, and then handed over to Mum and Maddison to complete the third leg of the race.

Team Griffiths raised £1,142 for The Movement Centre, and had their fundraising efforts recognised by NatWest, where Jo works. The money was raised by the family along with Jo’s colleagues at NatWest in Oswestry, through Cake sales, a sponsored walk. NatWest match funded their fundraising with a donation £1000. This brought the total to an incredible £2142. Well Done Team Griffiths!!