The Movement Centre are delighted to be The Marches School’s chosen charity this academic year! 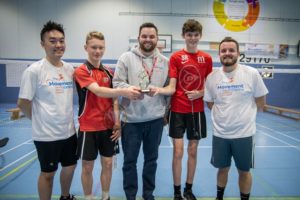 The School in Oswestry has held a number of events throughout the academic year to encourage students to raise money for The Movement Centre.

Students and staff from The Marches School have had to think or creative ways to raise funds. Back in October, they held a charity badminton match with Teachers Mr Pritchard and Mr Lin going head to head against Year 11 students, it was a closely fought contest but despite the teacher’s best efforts, the students came out victorious. Donations upon entry to watch the event resulted in excess of £200 being raised. In December, the school supported a Festive Fun Run, which was very competitive; despite the chilly weather, the students had a great time and managed to raise further funds in the process. At the beginning of this year, to conclude the schools ‘Everyone Can’ day, Year 8 took part in a colour run! This was a great success with over 220 students and staff covered in powdered paint with huge smiles on their faces. Many of the staff relished the opportunity to throw the powdered paint at the students and in turn, the students tried to get as covered as possible. Finally, Year 10 students volunteered their time to wash staff cars over the course of a recent half term for a donation towards the charity.

The fundraising pot currently stands at an impressive £1,302.79, with some funds from Year 11 events having already having been donated.

Marches School staff members, Hannah Heighway and Sian Grassby who have helped the students coordinate their fundraising efforts commented; “As a school we are so proud of the creativity, effort and kindness that the students have shown in order to raise money for their chosen charity. The Movement Centre carries out such fantastic work in the community and we hope that our donation will help support their life changing efforts. As a school, we are already looking forward to working with our students again to continue to support charities within our local community.”

We want to say a very big thank you to everyone at The Marches School for their fantastic support!